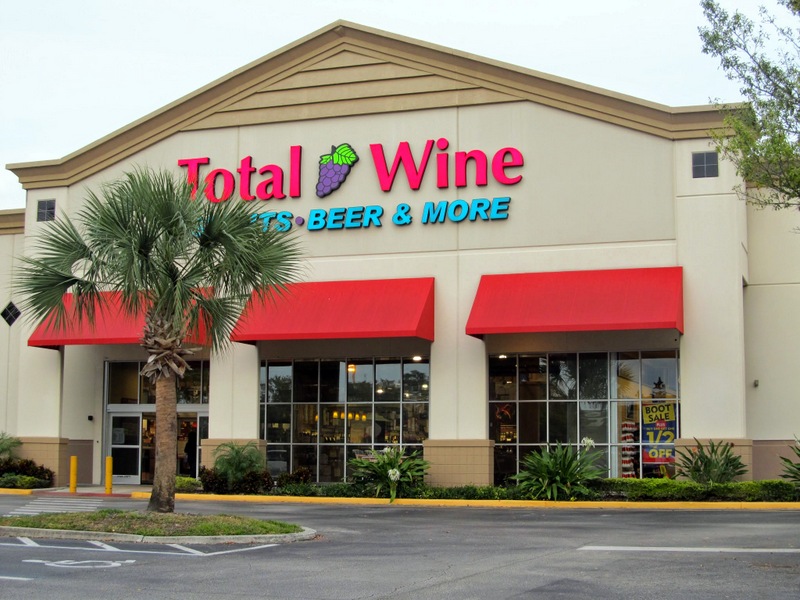 It’s been my hope that the Supreme Court would issue a broad ruling that would expand on 2005’s Granholm v. Heald, opening up online sales of wine across state lines. Few things frustrate me more than trying to locate a wine that none of my local shops carry. If I could buy freely online from out of state retailers, that wouldn’t be an issue.

This was a large reason why I also donated and signed onto Wine Freedom’s Friend of the Court Brief for Byrd.

As oral arguments were finishing, it wasn’t long before analysis from in court observers trickled out. While it seems likely that the Court is going to strike down Tennessee’s residency requirement for retailers (which is at the heart of the case), legal experts like Sean O’Leary, the Irish Liquor Lawyer, predicts that the ruling is going be narrow and not tackle the broader issue of consumer freedom.

And that likely will be because of one of my former employers–Total Wine & More.

The Amazon of Liquor?

I have no particular knowledge about Total Wine & More’s involvement in Tennessee or the Supreme Court case apart from what has been publically reported.  When I worked there, I was only a sales floor associate, wine class educator and new store trainer. Essentially just a worker bee, if you will.

But even with my very limited insight, there was one Supreme Court exchange that O’Leary related to Forbes contributor Liza B. Zimmerman that jumped out to me.

O’Leary also thinks that the scope of the case has also remained narrow as the attorney for Total Wine—a large enough chain that interstate shipping is not key to their profit model—refused the invitation to go towards a discussion of direct-to-consumer sales. He adds that “Justice Gorusch challenged him and said ‘But isn’t the next business model just to try and operate as the Amazon of liquor? ‘ ”

In response, O’Leary says that “Total Wine’s attorney indicated that his client wanted to operate as a bricks-and mortar [store] and wants to be subject to Tennessee’s laws.” The long-term goal for the chain would be to “not to be discriminated against.” — Liza B. Zimmerman, Forbes.com 1/20/2019

Sidestepping or Something Else?

This “Amazon of Liquor” exchange has been featured in multiple reports on the case. It is often coupled with surprise at Total Wine’s demuring from aggressively fighting for online consumer channels. The initial response seems to be that Total Wine was sidestepping the issue.

The New York Times even noted Justice Elena Kagan’s skepticism to the answer of Total Wine’s attorney that those broader issues could be debated another day.

“Well,” she said, “we’re leaving a lot of things for another day, but they all seem to be demanded by the principles that you’re asking us to adopt.” Elena Kagan, as reported by Adam Liptak of The New York Times, 1/26/2019

While I’m disheartened at the likelihood of a narrow ruling, Total Wine’s stance doesn’t surprise me in the slightest. That’s because the mythos of Total Wine having eyes on being the “Amazon of Liquor” is way off course.

In fact, their entire business model is actually seriously threatened by a broad ruling opening up online sales. Many wine lovers don’t know about David & Karen Dunphy’s 16 x 20 Wines. They only make a few hundred cases and have limited distribution.
Total Wine trains their associates to listen for clues so they can add-on bottles from small producers like this.
So if they hear that a customer enjoys Paul Hobbs’ winemaking, they may suggest the Dunphy’s wine.

Again, these are just the observations of a former worker bee. But from my past experience, the strength of Total’s business model doesn’t translate well to online sales.  Total Wine only succeeds if people physically walk into their stores and interact with their associates.

Total Wine’s model is built around three pillars–low prices, large selection and customer service. They utilize the first two pillars to get people into the store. Then they rely on their staffing to deliver on that third pillar of service.

Associates are trained from day one to work on building relationships with customers, listening to their likes and dislikes. They are instructed to use that feedback to “build the basket”. This is essentially recommending new wines that the customer may not have had yet and to keep adding bottles.

If someone comes in looking for a particular wine, the goal is that they don’t leave with just that one wine. Hopefully, they will have at least 2-3 more bottles of something new to try as well.

Often these extra bottles will be small producers and limited releases that Total Wine seeks out to bolster their selection. It’s the associate job to listen to the customer and make strong recommendations of wines they’ll like.  The hope (and key to Total’s success) is that the customer returns looking for these new wines.

But That’s Hard to Do With Online Sales

Total Wine’s best leverage of their large selection is by having customers fall in love with wines that they can’t find easily elsewhere. That’s not likely going to happen without face-to-face contact and relationship building by their staff.

While I don’t have any concrete data, I strongly suspect that people who go to a website for a particular wine likely only buy that one wine. Anecdotally, this was often how the online orders received at the stores I worked at played out. As an associate, these “in-store pick up” and later Instacart delivery orders were sources of endless frustration since our ability to build relationships with these customers was near non-existent.

Without building relationships, learning customer’s tastes and being able to “build the basket”, Total Wine’s strength as a major retail player is significantly reduced.

In fact (and, again, I have no special insight here), I would wager that the management of Total Wine actually dreads the idea of an “Amazon of Liquor”. Because such an entity would be their fiercest competitor and neutralize most of their strengths. Since I can’t buy freely online, right now I use WineSearcher.com to get a general idea of how competitive the pricing is of the retailers in my market.

Take out your phone and look for a particular wine on WineSearcher.com. Not only can you easily find the average retail price but you can shop around to find the retailer with the lowest price.  That’s not always going to be the same retailer or even one that is local.

If you open up the floodgate for more online sales, retailers will be competing with more than just their local market in pricing. While that’s great for consumers, that’s not great for retailers like Total Wine who aim to have the lowest price in their market.

The typical Total Wine store leverages their large retail footprint to carry thousands upon thousands of wines. This is often far more than their local competitors. But that’s only a pittance of the amount of wine that could be available if consumers could shop freely online.

There are only so many skus that a physical retail store can carry. Total Wine might be the “big dog” now in markets. But online sales tosses that calling card out the window. With online sales potentially neutralizing the strength of low prices and large selection, retailers like Total Wine would have to up their game to get people to shop in stores with more in-store education classes and tasting events.

Far from desiring to be the Amazon of Liquor, the Supreme Court testimony of Total Wine shows that they are more like Jason and the Argonauts trying to carefully navigate away from Themiscyra.

Their business model of low prices and large selections makes their brick-and-mortar stores destinations for consumers. The relationship building and customer service of their staff keep those consumers coming back.  But that all begins with customers physically shopping in stores.

This is the irony in Tennessee Wine & Spirits Retailers Association vs. Blair.

Total Wine clearly wants to win the case, keeping their Knoxville location and opening up more stores. However, winning with a broad ruling could be worse for them than losing.

Many local retailers and governments try to keep Total Wine out by clinging to protectionist and discriminatory laws. They think these laws hurt Total Wine and will slow their growth. Yet it is the antithesis of these laws–allowing more consumer freedom–that would deliver the hardest blow to Total Wine.

Total Wine and the Amazon of Liquor