After hitting Pessac-Léognan in our last post, we’re are going to continuing our overview of the 2017 Bordeaux Futures campaign by heading to St. Julien to look at the offers for the 4th Growths Ch. Beychevelle and Talbot, Clos du Marquis made by the Delon family of Château Léoville-Las Cases and the well-regard unclassified estate of Ch. Gloria.

First time visitors to the series are well served by starting with our very first Bordeaux Futures 2017 post covering the offers of Palmer, Valandraud, Fombrauge and Haut-Batailley. That post lays the groundwork out for our approach here at Spitbucket with buying futures for the 2017 vintage.

At the bottom of the page there are links for additional posts in this series. You can also subscribe to SpitBucket to get the latest entries delivered right to your email.

The origins of Beychevelle dates back to 1565 when it was owned by a member of the Foix Candale family who owned the historical estate of Ch. d’Issan in Margaux.

However, the name “Beychevelle” came about during its time under the ownership of Jean Louis de Nogaret de La Valette, the Duke of Epernon, who as Admiral of France commanded high respect with ships lowering their sails in tribute as they passed by his estate on the Gironde. The local terms for “lower the sails”, becha vela and baisse voile, eventually became Beychevelle. The estate pays homage to this history with the sail boat featured prominently on the label.

The beauty of the Chateau at Beychevelle has prompted comparisons to the “Versailles of Bordeaux”.

Over the next couple centuries Beychevelle would see a series of owners (including Pierre-François Guestier of Barton and Guestier fame) until the 1980s when it was sold to a group that included Japanese whiskey maker Suntory and the negociant firms Barriere Freres and Oenoalliance.

The Suntory group brought Philippe Blanc in as technical director with Romain Ducolomb, formerly of Ch. Clinet in Pomerol, joining him in 2012. Since 2008, the estate has been in the process of converting all its vineyards to organic and sustainable viticulture and have earned ISO 14001 certification for the property.

Ch. Beychevelle’s 14 plots of vineyards are scattered throughout the commune of St. Julien and includes a small plot that is technically outside the AOC boundaries in the Haut-Medoc commune of Cussac. However, due to the estate’s historical use of the vines dating back before the 1855 classification, they have been grandfathered into permitted use for Beychevelle’s Grand Vin and second wine, Amiral de Beychevelle. Other parcels include neighboring plots that border the 2nd Growth estates of Ducru Beaucaillou, Léoville-Barton and Gruaud Larose.

Only 52% of the production went into the 2017 Château Beychevelle (they normally shoot for 60%), and the blend is 50% Cabernet Sauvignon, 45% Merlot and the rest Petit Verdot and Cabernet Franc that’s still aging in 60% new oak. This inky purple-colored beauty gives up loads of blue fruits, black cherries, underbrush, and a touch of minerality in a medium to full-bodied, pretty, elegant package that’s very much in the style of the vintage. This estate has been on a serious roll lately, and the 2017 isn’t going to break the trend. — Jeb Dunnuck, JebDunnuck.com

I wholeheartedly agree with Dunnuck that Beychevelle has been rocking it for the last decade or so, making several bottles (like the 2009 WS Ave $121) that I would put on par with many 2nd Growths. Sadly (for consumers) this success has not been a well kept secret so the prices have risen quite a bit over the past several years.

That’s what makes seeing a 2017 average under $80 such a surprise and a very solid Buy that I’m going to jump on. I wouldn’t be shocked to see the price of this one rise when the bottles finally hit the market closer to the $90-100 mark that the 2014-2016 are fetching now. 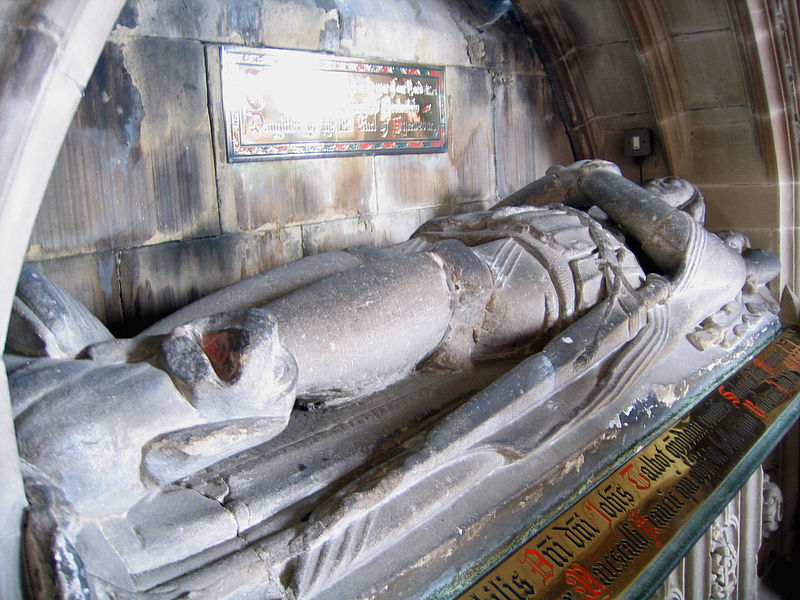 The tomb of John Talbot who died fighting against the French in the Battle of Castillon.

Named after John Talbot, 1st Earl of Shrewsbury, who died in 1453 in the decisive Battle of Castillon during the Hundred Years’ War, it is not exactly known what the English commander’s connections were to the St. Julien property. Clive Coates notes in Grands Vins: The Finest Châteaux of Bordeaux and Their Wines that there is no evidence that Talbot owned any property at all in the Medoc.

However, with the English being such avid consumers of Bordeaux wines, many Bordelais during the 15th century had English sympathies during the war so it’s possible that the estate was named in honor of those sympathies.

The modern history of Talbot began in 1917 when it was purchased by the Cordier family who were notable negociants. For several decades, the Cordiers bypassed the Place de Bordeaux and en primeur system by selling their wines directly (and exclusively) through their negociant firm. But now Talbot is available through several firms and merchants.

The same year the Cordiers bought Talbot they also purchase a stake in the 2nd Growth Ch. Gruard-Larose which they later sold in 1997 to Jacques Merlaut. In 1999, the family acquired the Haut-Medoc estate Chateau Senejac which was ran by Lorraine Cordier until her death in 2011. Today both Talbot and Senejac are managed by Lorraine’s sister, Nancy Bignon-Cordier with Stephane Derenoncourt and Jacques Boissenot as consultants. In 2017, Jean-Michel Laporte (formerly of La Conseillante in Pomerol) was brought on as technical director.

Among the unique viticultural practices of Talbot is the use of Genodics technology that uses electromagnetism and sound waves emitted into the vineyard to control growth.

Unlike many other Left Bank estates with their many scattered parcels, the vineyards of Talbot are essentially one large block of 102 ha (252 acres) neighboring the trio of Léoville properties Las-Cases, Barton and Poyferré.

I’ve not had this 2000 Talbot but given my experience with this estate, I’m willing to bet that this wine still has a lot of stuffing and life.

The current ratio of red grapes planted is 66% Cabernet Sauvignon, 26% Merlot, 5% Petit Verdot and 3% Cabernet Franc with the amount of Cabernet Sauvignon in the vineyard steadily decreasing since the 1990s in favor of the other three varieties. Around 25,000 cases a year are produced.

The 2017 Talbot is powerful and dense, but also a bit rough around the edges, with burly tannins that add to that impression. It will be interesting to see if the 2017 acquire more finesse during aging. Based on the wine’s persistence, there is a reasonably good chance that will happen. Intense blue/black fruit, gravel, smoke and licorice add to the wine’s dark personality. Tasted two times. — Antonio Galloni, Vinous

While I’ve enjoyed many bottles of Talbot over the years, these are not wines for the impatient. Even the very warm and ripe 2003 vintage (WS Ave $81) needed at least a decade to finally open up and start delivering pleasure. I probably won’t even think about touching another of the 2005s (WS Ave $124) in my cellar till at least 2020.

Perhaps Laporte’s influence and the increase of Merlot in the vineyards will gently shift Talbot to a more approachable style but that remains to be seen. But for now and with my goal of seeking more short-term “cellar defenders” from 2017, I’m going to Pass.

Originally created by the Delon family as a second wine of the 2nd Growth Léoville-Las-Cases in 1902, today Clos du Marquis is its own entity with its own second wine, La Petite Marquis.

The vineyards for Clos du Marquis are separate and distinct from the Léoville-Las-Cases parcels. Located in the northern end of the commune they are flanked by neighboring vines of 2nd Growths Léoville Poyferré, Léoville Barton as well as Pichon Lalande across the border in Pauillac.

However, the estate is still worked by the same viticulture and winemaking team as Léoville-Las-Cases with Jean Hubert Delon managing the property and Bruno Rolland as cellarmaster.

This takes its time, has a fairly hefty structure and unfurls at its own pace. The last day of harvest was 4 October, but the overall growth cycle was early so they were able to wait for full ripeness, and even though the fruit flavours are savoury, they are intense. It certainly has some bounce and energy, and the balance is there too. An enjoyable wine that should be ready to drink within four to six years, but the low pH and good freshness suggest it should also age well. 55% new oak barrels. 80% of production, with the rest going into the second wine. (90 points) — Jane Anson, Decanter 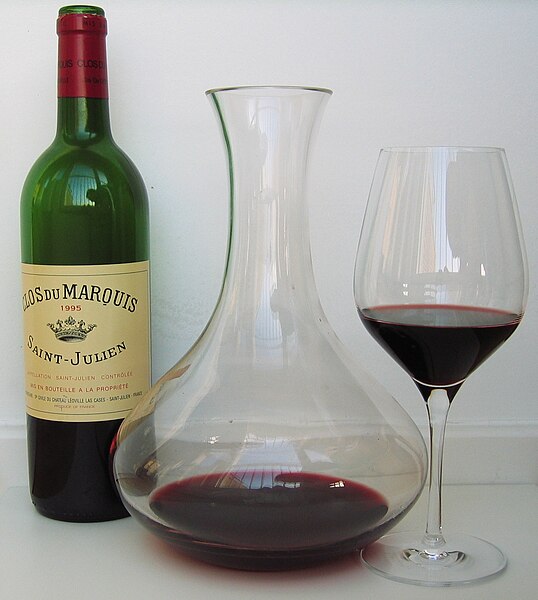 While thought of as a “second wine”, Clos du Marquis is really its own estate with dedicated vineyards.

Even though Clos du Marquis isn’t an official second wine, you can still taste the “baby brother” resemblances to the hulking, well-structured style of Léoville-Las-Cases. This is a wine that regularly drinks like it could be a 3rd growth itself and is often a pretty stellar value for its pedigree.

But it does usually need adequate time in the cellar to truly show its stuff. While Anson seems optimistic that it will come around in 4-6 years, for around the same average price I’m much more incline to pick up more bottles of the 2014.

This is always a solid wine and would be a good buy for Bordeaux drinkers who want to build up a cellar and get a “baby Léoville-Las-Cases” (2017 WS Ave $197) for nearly a quarter of the price. But for me, and my buying objectives this vintage, I’m going to Pass.

While I’m sure the audience would mostly be made up of just wine geeks, I would love to see a movie about the life of Henri Martin. The mayor of St. Julien during World War II, Martin dreamed of owning a top Bordeaux estate and started piecing together what would become Ch. Gloria in 1939.

With the advice and encouragement of his close friend Jean-Charles Cazes of Ch. Lynch-Bages, Martin would buy, barter and trade parcels of vines over the next couple decades from nearly every classified growth in St. Julien. Today Ch. Gloria is made up of 50 ha (124 acres) of vines that originally belonged to the 2nd Growths of Ducru Beaucaillou, Gruaud Larose, Léoville-Barton, Léoville-Poyferré, 3rd Growth Ch. Lagrange and 4th Growth Ch. Beychevelle at the time of their classification in 1855. He even acquired some vineyards from the Pauillac estate Duhart-Milon that they owned in St. Julien.

The estate is still owned by Martin’s daughter Francoise and by her husband Jean Louis Triaud with their children, Vanessa and Jean, actively involved. The Martin-Triaud family also own the 4th Growth Ch. Saint Pierre and Ch. Bel Air in the Haut-Medoc.

While this wine has plenty of wood flavors, the fruit weight justifies it. It is rich with good spice and balanced acidity. It will develop relatively quickly, drink from 2023. — Roger Voss, Wine Enthusiast

It’s hard to hide my affection for Ch. Gloria. As I noted in my review of the 2009 Ch. Gloria, these wines are almost always criminally under-priced with how consistently delicious they are.

They can easily be priced like many 3rd and 4th growths but due to the quirks of the Bordeaux market and lasting legacy of the 1855 classification (not to mention the Martin-Triaud family’s apparent lack of ego), they remain one of the best bangs for the buck in the wine world. Always a solid Buy.