It was the opinion of Tom Wark from the Fermentation Wine Blog that the conference wasn’t–which was a sentiment that the leadership of the conference has been harboring for sometime. As Wright explained in the announcement,

Blogging is simply one form of communication and the reality is almost all blogger attendees at the conference also engage in social media. Many also do other forms of wine writing, either for print magazines, online magazines, or wineries. Wine Media Conference more accurately reflects what our attendees do.

Just as importantly, the change to Wine Media Conference is designed to be more welcoming to those who do not blog but do communicate about wine. This includes social media influencers, non-blogging wine writers, and those who work in communications in the wine industry. — Allan Wright, 11/9/2018

The announcement was also made on the conference’s public Facebook group where I shared my own concerns–namely that I likely wouldn’t have originally signed up to attend something called a “Wine Media Conference.”

What is Wine Media?

Much like how a group of people can pick out different flavors and aromas in the same wine, the same word can have different connotations to various people. The dictionary definition of “media” offers one tasting note: “the means of communication, as radio and television, newspapers, magazines, and the Internet, that reach or influence people widely.”

Though I don’t know how influential those multiple copies of Wine Spectator where with those empty cocktail glasses.

The “reach or influence people widely” part is what resonates most with me and colors my view of “Wine Media”. Here I see an echelon of established publications like Wine Spectator, Wine Enthusiast, Wine Advocate, Decanter, Wine Business Monthly or online mediums like SevenFifty Daily, VinePair and WineSearcher.com.

And I do see some blogs in that realm such as Tom Wark’s Fermentation, Jamie Goode’s Wine Anorak and Alder Yarrow’s Vinography. Though he is now a prominent writer for Wine Enthusiast, I would also add Sean Sullivan’s Washington Wine Report to that list as well.

But I certainly do not see myself in that ballpark.

As I think back to my apprehension of being a relatively new blogger attending my first conference this year, I know that even the idea of considering myself “Wine Media” would have been a non-starter for me.

I’m not “Wine Media”. I’m not Jancis Robinson. I haven’t been blogging for a decade-plus like Goode, Yarrow and Co. I’m a just a geek who sits at home drinking wine, reading wine books and writing about what excites me at a particular moment.

The idea of a “Wine Media Conference” would have seemed too exclusive to include me.

In contrast, the idea of attending something called the “Wine Bloggers Conference” felt approachable and inviting. Being part of a community of wine bloggers felt attainable. It was my hope in attending that I could find other people like me that I could relate to. Much to my delight, I did. One idea for future conferences would be to have the name tags note how many previous conferences a person has attended. That would be a great way to seek out more newbies or know who you should ask questions of.

One of the pleasant surprises for me while attending the conference was how many fellow conference newbies there were. I got a chance to meet folks like Noelle Harman (Outwines), Anne Keery (Aspiring Winos), Earle Dutton (Equality365) and more who, like me, were relatively new to wine blogging. It was immensely rewarding listening to their perspectives–their successes and stresses as well as the lessons and bumps they’ve learned along the way. Coupled with the tools and insights that I got from veteran bloggers and seminars, I know that I left the conference a better blogger than I was when I arrived.

It would have been unfortunate to miss that because of the limitations and exclusionary feel of the name “Wine Media”.

While all bloggers want to grow their readership–and will use things like social media to help expand their reach–the reality is that the vast majority of us will never come close to the dictionary media definition of widely reaching and influencing people.

And, honestly, not all of us may even want to be “influencers”–at least not in the sense that is in vogue today. Some of us may just want to have fun geeking and writing about wine.

Will those perspectives get smothered underneath the tarp of “Wine Media”?

The Need For “Fresh Blood” and Inclusion Many podcasters and videographers are still blogging their journey with wine–just via audio or visual mediums.
Also, most episodes usually include show notes (like this example from Decanted’s recent podcast) that are basically blog posts.

I understand the need to be inclusive–because the world of wine and wine communication is constantly expanding. Another great surprise from the conference was being introduced to some great new podcasts like the Weekly Wine Show and Decanted Podcast.

I wholeheartedly support the conference’s desire to see more participation from podcasters. The same with videographers as their work on YouTube is opening up a whole new realm for wine education. While I’m admittedly skeptical about the extent of influence that Instagram, Pinterest and other social media channels which limit context have, I eagerly want to learn more from individuals active in those venues about their experiences and insights that may abate that skepticism.

Plus, it seems like the conference has seen significant turnover in attendees. It makes sense that they would want to inject it with fresh blood.

Prior to the start of this year’s Wine Bloggers Conference, Tom Wark made several poignant observations about the waning interest and declining numbers in wine blogging. While 2018 saw a little bit of a bump, Wark noted how differently the list of attendees for this year’s conference has looked compared to years past.

Those of us who have been following and reading wine blogs since their start, we can look at a partial list of attendees at the upcoming conference and notice that no more than a small handful of those folks who started out blogging during the format’s peak time of interest are attending the conference. It’s understandable. On the one hand, many of these people no longer blog. Others may still be blogging, but no longer find interest in the conference. — Tom Wark, Fermentation Wine Blog, 9/10/2018

There hasn’t been much study into why we’ve seen a steady decline of interest in wine blogs–though David Morrison of The Wine Gourd has some thoughts and data. A lot of it does seem to be the changing landscape of wine communication.

But if we’re already “bleeding out” wine bloggers, how effective will an infusion of new blood be if, instead of “clotting” the loss, we’re excluding new platelets? Will the number of other wine communicators who attend offset all the newbie wine bloggers who may now feel excluded?

That will be a challenge for Zephyr Conferences to tackle in their messaging and promotion of the newly renamed conference. Not everyone is going to share the same definition or “tasting note” of  what is welcomed as “wine media”.

I don’t want this post to give the impression that I’m downplaying or denigrating the role of bloggers like myself. Nor am I saying that we’re necessarily inferior to traditional wine media. We’re still wine communicators but, the majority of us (myself included), are certainly far less established than the traditional wine media. 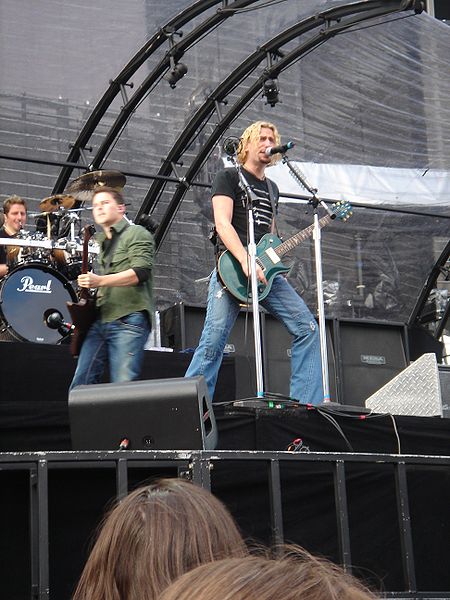 Though sometimes you can have multi-platinum albums and still end up just being Nickelback.

It’s like the difference between a garage band and a rock star with multi-platinum albums. This is the crux of my apprehension with adopting the name of “Wine Media”.

While our “garage band” of wine bloggers are most definitely musicians like the rock stars of wine media, it feels far too presumptuous to claim the title of “rock star” on our own. This isn’t about talent or worth. It’s about proving yourself on the larger stage.

Someday I would love to be spoken of in the same breath as Allen Meadows, Tom Wark, Jamie Goode, Jancis Robinson, etc. But I would never place myself in that sentence. I need to earn my place in that peer class and pay my dues along the way.

The same day that the Wine Bloggers Conference had the panel asking the question about whether the conference was appropriately named, Lewis Perdue gave the keynote address. Stemming from his journalistic background of working at the Washington Post, Wine Business Monthly and now publishing Wine Industry Insight, a central theme of Perdue’s talk was about building trust with your readership–building credibility.

This is what a musician does with every gig they play, every song they record. They don’t step out of the garage and onto the stage to tell the world that they’re a rock star. They go out and they prove it, paving the way for others to bestow that title on them.

As bloggers, we are building our credibility with every post. Some of us may be content to stay in the garage and play for family and friends. Others may want to move on to gigs that will take them to increasingly larger arenas.

Some of those bloggers may eventually become “rock stars” of wine media. But the path to that stage won’t be paved with telling the world that they’re “Wine Media”.

It will be by showing it.