In 1996, the Devillard family purchased Domaine des Perdrix in the Prémeaux-Prissey commune of Nuits-Saint-Georges. Today, Christiane and Bertrand Devillard manage the 12 ha (30 acres) estate with the 6th generation of this winemaking family, Amaury and Aurore, already helping.

The Vosne-Romanée bottling comes from 1.05 ha (2.5 acres) spread out among the climats of Les Quartiers de Nuits, Les Hautes Maizières and Les Chaladins. Located in the northern part of the village, bordering the Grand Crus of Echézeaux and Clos Vougeot, the plots are in an enviable location downslope from the Premier Cru vineyard Les Suchots. The ages of the plantings range from 90 to 30 years.

Other producers that make single vineyard bottlings from these climats include Nicolas Potel, Arnoux-Lachaux, Prieure Roch, Mongeard-Mugneret and A.F. Gros. 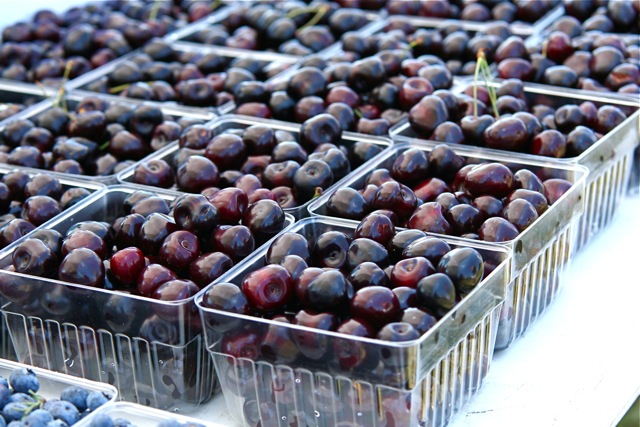 The freshness and juiciness of the dark cherries in this Pinot was impressive.

On the palate, the dark cherries come through and are very lively with medium-plus acidity. The acidity amplifies floral red fruit notes of strawberries as well. Medium tannins hold up the medium-bodied weight of the fruit and have a velvety texture that is accentuated by the creamy vanilla. Long finish brings back the oak spice but mostly lingers on the still remarkably fresh fruit.

When I purchased this bottle a couple of years ago, it was around $80. Since then the price has skyrocketed along with other Burgundies to now $129.

For under $100, this is a gorgeous village-level Burg from some choice plots that is certainly worth grabbing. Closer to $130, you are paying a premium, but it may still be worth it for a special occasion. It’s holding up very well. Back in January I wrote a post called Wine Clubs Done Right which detailed my discovery of Tablas Creek’s Wine Club program and ultimate decision to join it. As I noted in that post, I don’t join many wineries’ wine clubs because they rarely offer (to me) compelling value and I don’t like being committed to buying quantities of wine that may eventually shift in style due to changing winemakers/ownership, etc.

However, while exploring the Tablas Creek story and all they had to offer I found many compelling reasons to pull the trigger and join. Much to my surprise, the folks at Tablas Creek were actually interested in my tale and offered on their blog some cool behind the scene insights into their own thought processes in how they set up their wine club programs.

You usually don’t see that kind of receptivity and transparency with many wineries but, as I’ve found out in the nearly 8 months since I’ve been a member of Tablas Creek’s wine club, that is just par for the course with them. It’s not marketing or show, these folks are really just wine geeks through and through who clearly love what they are doing and sharing that passion with others.

If you are wine geek yourself, I honestly can’t recommend a more exciting winery to discover.

Beyond their hugely informative blog with harvest and business details, the Tablas Creek website also offers a fantastic vintage chart of their wines that is updated regularly and an encyclopedic listing of grape varieties they farm complete with geeky history, winemaking and viticulture details.

Jancis Robinson’s Wine Grapes is still my holy writ (and I really like Harry Karis’ The Chateauneuf-du-Pape Wine Book chapter on grapes) but when I’m away from my books and want to check up on a Rhone variety there is no better online source than the Tablas Creek site. Plus, the particular winemaking details they cover in the entries is often stuff that you won’t find in many wine books because it comes from their decades of hands-on experience working with these grapes between themselves and the Perrins’ Ch. Beaucastel estate. 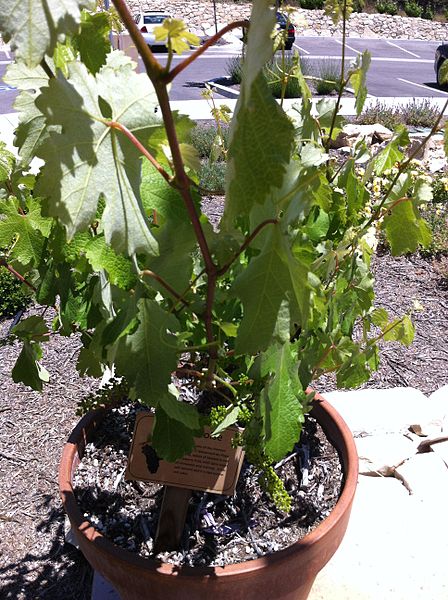 Counoise vine outside the tasting room at Tablas Creek.

But enough with the effusive gushing and let’s get down to some hardcore geeking over the 2017 Tablas Creek Vermentino from the Adelaida District of Paso Robles.

Tablas Creek Vineyards was founded in 1989 as a partnership between the Perrin family of Château de Beaucastel and Robert Haas of Vineyard Brands. As I noted in my 60 Second Review of the 2000 Beaucastel Châteauneuf-du-Pape, the Perrins have been in charge of the legendary Rhone property since 1909.

Robert Haas established Vineyard Brands in 1973 as part of a long wine importing career that began in the 1950s working for his father’s Manhattan retail shop M. Lehmann (which was eventually bought by Sherry Wine and Spirits Co. to become Sherry-Lehmann). After World War II, he was the first American importer to bring Chateau Petrus to the United States. Haas also helped popularize the idea of selling Bordeaux futures to American consumers. 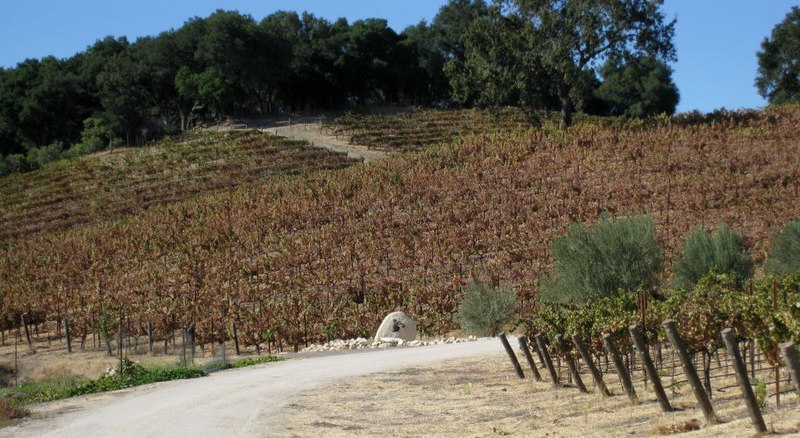 The vineyards of Tablas Creek with some of the rocky limestone soil visible.

The similarity in the maritime climate and limestone soils of the Adelaida District, west of the city of Paso Robles, inspired Haas and the Perrins to purchase 120 acres and establish Tablas Creek. Planting of their estate vineyard began in 1994 and today the winery has 115 acres of vines that are biodynamically farmed–producing around 30,000 cases a year.

Utilizing its close connection to the Chateauneuf estate, Tablas Creek would go on to become an influential figure in the Rhone Ranger movement in the United States. Doing the heavy lifting of getting cuttings from Beaucastel through quarantine and TTB label approval, Tablas Creek would help pioneer in the US numerous varieties like Counoise, Terret noir, Grenache blanc, Picpoul and more. Additionally the high quality “Tablas Creek clones” of Syrah, Grenache and Mourvedre have populated the vineyards of highly acclaimed producers across California, Oregon and Washington.

In the mid-2000s, Robert’s son Jason joined the winery and is the now the general manager as well as the main contributor to Tablas Creek’s award winning blog. 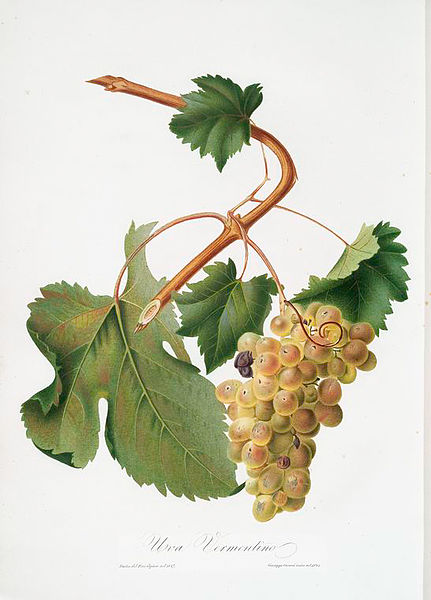 Vermentino from Giorgio Gallesio’s ampelography catalog published between 1817 and 1839.

In March 2018, Robert Haas passed away at the age of 90 leaving a lasting legacy on the world of wine.

However Ian D’Agata, in his Native Wine Grapes of Italy, notes that these conclusions are vigorously disputed by Italian growers, particularly in Liguria, who point out that different wine is produced by Pigato compared to other Vermentinos. D’Agata, himself, relays that he usually finds Pigato to produce “bigger, fatter wines” that have a creamier texture than most Vermentinos. The name “Pigato” is believed to have been derived from the word pigau in the Ligurian dialect, meaning spotted, and could be a reference to the freckled spots that appear on the berries after veraison.

The absence of Vementino being mentioned in the 1877 Bollettino Ampelografico listing of Sardinian varieties suggest that it could be a more recent grape to the island (though it was later included in the 1887 edition). Today the grape plays a prominent roll in Sardinia’s only DOCG wine–Vermentino di Gallura.

The connection to Favorita seems to be less disputed though Robinson, Julia Harding and José Vouillamoz note in Wine Grapes that historically the grape was believed to have been brought to Piedmont originally as a gift from Ligurian oil merchants. The first documentation of the grape was in the Roero region in 1676 where it was reported to be a “favorite” for consumption as a table grape.

Almost two decades earlier, in the Piemontese province of Alessandria, a grape named “Fermentino” was described growing in vineyards along with Cortese and Nebbiolo with this, perhaps, being the earliest recorded mentioning of Vermentino.

Historically, as Favorita, the grape has a long history of being blended with Nebbiolo as a softening agent to smooth out the later grape’s harsh tannins and acid in a manner not too dissimilar to the use of white grape varieties like Trebbiano and Malvasia being blended with Sangiovese in the historic recipe for Chianti.

While once the primary grape of Roero, in recent decades Favorita has fallen out of favor as Arneis and Chardonnay have gained in popularity. 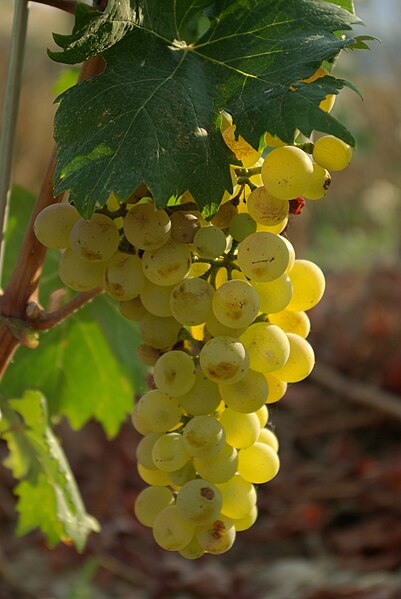 Outside of Italy and Corsica, Vermentino can also be found in the Languedoc-Roussillon region of southern France where it is known as Rolle. Beyond Europe the grape is grown in the Bekaa Valley of Lebanon and has become one of the fastest growing “alternative grape varieties” in Australia with nearly 300 acres planted in 2016 in areas like Victoria, the Hunter Valley, King Valley, the Barossa and Murray Darling.

While Tablas Creek mostly focuses on Châteauneuf-du-Pape grapes, they were one of the first domestic producers of Vermentino in the United States when they planted the vine in 1993 based upon the recommendation of the Perrin family’s nurseryman who thought the vine would do well in the soils and climate of the Adelaida District. While originally used as a blending component, the winery has been making a varietal Vermentino since the 2002 vintage.

In 2008, there were around 20 acres of the Vermentino planted in California when there was some speculation that the grape could have appeal to Sauvignon blanc drinkers. By 2017 that number had jump to 91 acres as producers like Tablas Creek, Seghesio in the Russian River Valley, Mahoney Vineyards, Fleur Las Brisas and Saddleback in Carneros, Unti Vineyards in the Dry Creek Valley, Gros Ventre Cellars in El Dorado, Brick Barn in Santa Ynez, Twisted Oak in the Sierra Foothills and others began receiving acclaim for their bottlings.

Outside of California, notable plantings of Vermentino can be found in the Applegate Valley of Oregon (Troon Vineyard and Minimus Wines), the Texas High Plains (Duchman Family Winery) and the Monticello AVA of Virginia (Barboursville Vineyards).

In 2017, Tablas Creek produced 1430 cases of Vermentino. While some producers age their Vermentino in neutral oak, Tablas Creek fermented the wine with native yeast and aged it in stainless steel tanks.

High intensity nose. Very citrus driven with kiffir lime, pink grapefruit and pummelo–both the zest and the fruit. There is also a tree fruit element that seems a bit peachy but I would put it more in the less sweet yellow peach category than white peach. 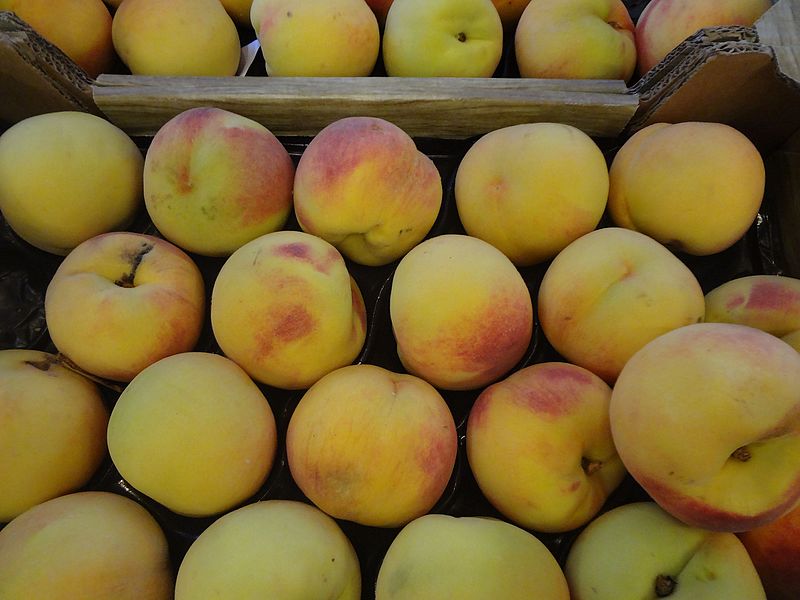 The mix of citrus and yellow peach notes are very intriguing with this wine.

On the palate, those citrus notes carry through and have an almost pithy element to them. Not bitter at all but it definitely adds weight and texture to the medium body of the wine. The medium-plus acid is mouthwatering and lively but well balanced with the acid highlighting the yellow peach note. The palate also introduces some racy minerality with a very distinctive streak of salinity that lingers long throughout the finish.

This is a fascinatingly unique and character driven wine that combines multiple layers of tropical and tree fruit with acidity, minerality, weight and texture. Well worth its $27 price.